“WE SHALL NOT BE MOVED”, the new single featuring ULRIKA & ERIC BIBB 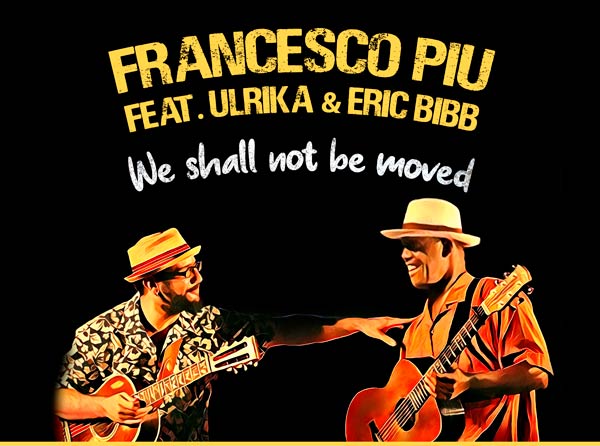 “WE SHALL NOT BE MOVED”, the new single featuring ULRIKA & ERIC BIBB

Released today, Friday, May 8, 2020, “WE SHALL NOT BE MOVED“, the new single by FRANCESCO PIU with its extended musical family featuring ULRIKA & ERIC BIBB.

The concerts have stopped, but not his desire to make music. So surprisingly “We shall not be moved” is released, the new single and video by Francesco Piu for Appaloosa Records, available from Friday, May 8th, 2020 on all major digital platforms and on YouTube with the related video, conceived and edited by Antonello Sedda.

A song built thanks to a wise work at a distance with many of the musicians who have joined the guitarist / singer in the studio and on stage in recent years, coordinated, mixed and mastered by Giuseppe Loriga. The whole thing is then enhanced by the featuring of Ulrika and Eric Bibb (voice and baritone guitar), his mentor, award-winning at the Blues Music Awards and nominated for the Grammy Awards. The two have been collaborating since 2012, when Eric produced “Ma-moo tones”, a turning point album by the Sardinian artist.

But in the track there are also the poignant chromatic harmonica of Davide Speranza, the powerful drums of Silvio Centamore and the enveloping hammond of Max Tempia, all already historical collaborators of Francesco. The rhythm section is supported by an arsenal of percussions, already very present in the last album “Crossing” (Bruno Piccinnu, bodran and daf; Paolo Succu, djembè and shakers; Gianfranco Marongiu, tambourine), Francesco Ogana‘s guitar and Fabrizio Leoni‘s bass and double bass. Besides the vocal contributions of Ulrika and Eric, the choirs are entrusted to the inspired vocalists Elisa Carta, Ilenia Romano, Denise Gueye, Rita Casiddu, the abrasive voice of Gavino Riva and the bluesman “forever young” Maurizio Fenini. The result is a sunny musical collective in which the voice and the six-stringed voice of Francesco are immersed.

The passage from the American spiritual tradition, which has become a manifesto of the struggle for the defence of civil rights in the USA, is musically arranged by Francesco and revised in the lyrics by Eric. The universal theme of rebirth is reproposed through a social coexistence based on respect and sharing, trying to make this piece an instrument to bring us closer together in these days of forced estrangement. It is no coincidence that the last chorus of the piece is entrusted to the sweetness of the little daughter Emma Piu and the final screenshot of the video reads:

“When we’re far from each other, Music joins our souls in an amazing hug”.