Francesco Piu duets with Tommy Emmanuel in the Cagliari concert 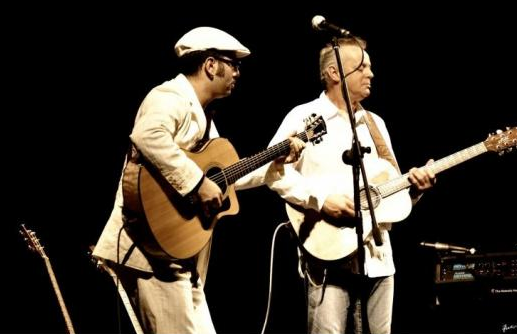 Francesco Piu duets with Tommy Emmanuel in the Cagliari concert

Tommy Emmanuel, the guitar tamer. Amazing performance, Sunday night at the Teatro Comunale for the closing of the Italian tour of the Australian acrobatic guitarist, artistic heir of the great Chet Atkins. Two hours of concert at the fulmicotone with a technique of finger picking to say the least exceptional and an evolution of the instrument that goes beyond the boundaries of using only the guitar for its own sake.

Four classical guitars transformed into percussion, thanks to the infinite possibilities of technology with the help of electronic effects that make every square millimeter of the six strings in as many possibilities of different sounds. Sounds that cross all musical genres. The country, pop, blues, rock, and more ballads, soul, samba, African and aboriginal rhythms, jazz and funky. In every performance it surprises for its freshness and originality, but even more so because it is rediscovered as a good anchorman able to involve and entertain the audience in a friendly and genuine way, dragging like a child with a brand new gift.
How is it going – asks the audience – I’m having fun like crazy and I hope for all of you.

Original songs and famous covers in the lineup of Tommy Emmanuel. A special care for four Baronets. It’s easy to recognize the famous “Michelle”, “Here comes the sun” or “Lady Madonna” alternated with compositions by Emmanuel himself and taken from the rich discography of the Australian guitarist (the first album dates back to thirty years ago), including those contained in the last album entitled “Endless road” and a dedication to the singer Judy Garland who first performed the beautiful and romantic “Somewhere over the rainbow” and included in the soundtrack of the film “The Wizard of Oz”.

The musical history of Mr. Emmanuel explains the executive ability with few comparisons currently in life. Self-taught, he began playing at the age of four, relying solely on his instinct as a good listener. Since then, his career has been on the rise and he has received numerous awards such as the “Nashville Music Award” in 1997 and several Grammy’s nominations. Good opening performance also for the young guitarist Francesco Piu from Sassari, considered by critics as one of the new talents of the blues guitar in Italy.