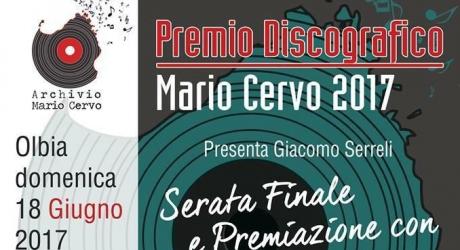 The jury sifted through forty records produced on the island, all of which were of a very high standard, and eventually identified five. Their creators will be awarded on Sunday at 9 p.m. in the garden of the Mario Cervo archive, in via Grazia Deledda, where, among other things, they will hold microphones and instruments to perform in front of the public.

The Mario Cervo Record Award, now in its third edition, is an appointment increasingly awaited by both musicians and fans. This time the winners will be Francesco Piu, Claudia Crabuzza, Paride Peddio and Jonathan Della Marianna, Ergot Project and Mauro Sigura quartet. Instead, the special prize for the career will go to the Olbiesi Collage, one of the most established Sardinian groups in Italy. The aim of the award, organized by the Cervo archive, is to promote and encourage the record production of Sardinian artists and reward the best records released the previous year, in this case 2016.

For this year the jury, coordinated by Tommy Rossi, was composed of musicians Andrea Pica, Pina Muroni, Marcello Zappareddu and Paoluccio Masala and journalists Dario Budroni and Giacomo Serreli, who will also be the presenter of the evening. The jurors have therefore chosen 5 records and as many musicians-band.

Francesco Piu, singer and multi-instrumentalist who moves with absolute skill between funky and blues, in 2016 churned out the album “Peace & Groove”. Pure energy, the fourth album of his career. On Sunday Piu will perform together with Gianmario Solinas, Gavino Riva, Giovanni Gaias and Gianfranco Marongiu. Claudia Crabuzza, appreciated singer-songwriter from Alghero, has instead published “Com un suldat”. This is her first album, sung in Catalan, awarded with the Targa Tenco for the best album in the minority language. And then there is “Brinca” by Paride Peddio and Jonathan Della Marianna, an hour of music dedicated to Sardinian dance with different contaminations and the collaboration of many protagonists of the island’s music scene. Also appreciated by the jury is “Beat-less” by Ergot Project, a factory where the working group, directed by Christian Marras, constantly varies with the aim of expanding the boundaries of experimentation. Finally, the album “The color identity” by Mauro Segura quartet, an album that is like a container that absorbs and processes the melodies of the Ottoman-Mediterranean tradition and the rhythms of contemporary jazz. The quartet is composed by Mauro Segura, Gianfranco Fedele, Tancredi Emmi and Alessandro Cau. Segura and Fedele will perform at the archive on Sunday evening.