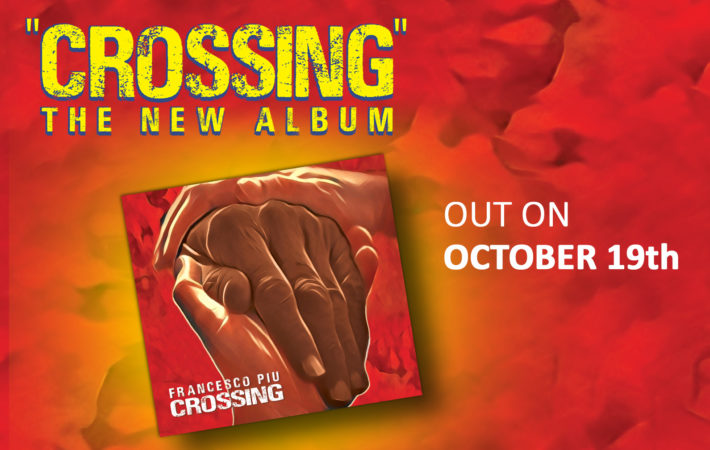 The blues guitarist singer FRANCESCO PIU returns with the new album CROSSING, available from next Saturday, October 19 for Appaloosa Records / IRD distribution. The new project will be presented the same evening live at Spazio Teatro 89 in Milan, on the occasion of the opening of the exhibition “Milano Blues 89”. Tickets are available from today on the official Vivaticket circuits.

Francesco Piu with his refined mix of blues, funky, rock and soul, boasts four studio albums and three live albums, tours throughout Europe, Canada and the United States, concerts in the most important festivals of the genre, openings to artists such as Johnny Winter, Jimmie Vaughan, Robert Cray, Charlie Musselwhite, The Derek Trucks Band, The Fabulous Thunderbirds as well as all the Italian concerts of the “John Mayall 85th Anniversary Tour” last March.

With CROSSING Francesco ideally brings Robert Johnson and his legendary pieces to the Mediterranean through his voice and the slide of his electric guitar, colors them with African and Middle Eastern percussion, Arabic and Greek strings, electronics and ancestral sounds of Sardinia (launeddas and singing a tenor).
“In this musical journey I dreamed of bringing Robert Johnson here, in the middle of the Mediterranean. I tried to mix the main route of the Mississippi blues with the African percussions, the ancestral sounds of my island, Sardinia, with the strings of oud and bouzuki that vibrate on the shores of the Mare Nostrum. All contaminated by a pinch of electronics to revive it in our days. This is my CROSSING.”

The new album is enhanced by the presence of prestigious guests such as Antonello Salis, Gavino Murgia, Gino Marielli of Tazenda, Marco Pandolfi, Bruno Piccinnu and Franziscu Pilu of Cordas et Cannas, DJ Cris and Lino Muoio. A sound synthesis that represents the mixture of cultures that accompany and enrich man from his appearance on Earth to the present day.

CROSSING – The Music Of Robert Johnson, from an idea and support of The Blues Place, was arranged by Francesco Piu, recordings, mixes and masters are by Giuseppe Loriga of Geppo Studio, Sassari.

A long trip, the past and the present crossing the same road.